With our powers combined

Out of nowhere, a post. Still working. No brainspace. But I needed to fix my PulseAudio again (surprise!), as the "Simultaneous output" option in paprefs doesn't seem to work anymore, so here's how I did it:


Searching around tells me I can install my own combined output with the pacmd program, loading the 'module-combine-sink' module and specifying which sinks to combine. Which requires the 'list-sinks' argument to determine what the name of the devices are as far as Pulse is concerned. Gosh, PulseAudio, you're so user friendly!

While we're at it, I can take the opportunity to combine just two of my outputs, the Avantree Leaf USB dongle and the normal speakers. I also have outputs created by my Yeti microphone and for HDMI output but I don't need that combined with everything else, and I suspect it just causes lag and other problems.

Was almost going to do it in Bash but... no, come on, a quick Perl 5 script will do nicely:


Now I can select the new combined output in pavucontrol: 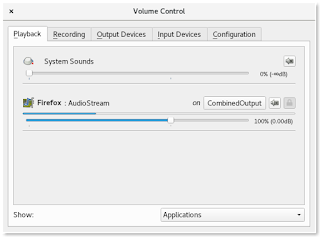